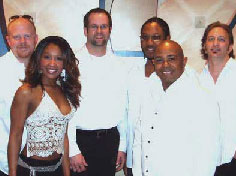 The Vision Band is perhaps the most versatile and interactive dance and show band performing on the Las Vegas Strip. Its wide repertoire which includes swing, Motown, classic rock, disco, funk, and contemporary R&B & pop, allows the Vision Band to appeal to virtually any audience. Vision is no ordinary band. Its members are a group of extremely talented and qualified musicians. There’s no better testament to that level of musicianship than the list of recording artist who use its members: Doc Severincon & The Tonight Show Band, Harry Connick Jr., Winton Marsailis, Taste of Honey and Sheena Easton to name a few. This is the reason why the Vision Band performed was a mainstay for 7 years at the Mandalay Bay Hotel & 2 years at Bally’s/Paris Las Vegas. Recently the group has been traveling across the region wowing audiences inDenver, Phoenix, Seattle and Palm Springs. Primarily performing dance hits, the band is always ready to make a party happen.