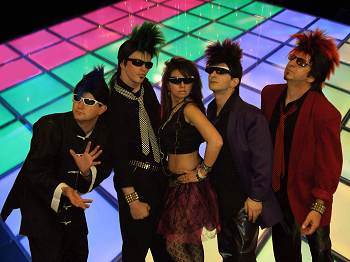 More than just an 80’s band, “Flex 80’s” is created by brothers Rob and Jason in 2000, quickly became one of the most popular and well known acts in the city, and over the last 8 years has performed in many of the top venues on (and off) the Las Vegas strip. Each of the group’s members are accomplished musicians and singers, and have worked with many high profile acts in Las Vegas, and international acts and recording artists around the world.

In 2000, “Flex 80’s” was the first band to perform at the House Of Blues flashback fridays 80’s night, and soon after became the house band at Santa Fe Station for most of 2001, where they developed a huge local following.  Next, they went on to be the first band to perform at The Palms on opening night , new year’s eve, and remained there for much of 2002.  The band continued to perform at private events, and in larger venues such as The Monte Carlo Brew Pub, the Rio, Fremont Street Experience, just to name a few, and in 2003  “Flex 80’s” became a favorite at Harrah’s Carnaval Court, where they spent the next 4 years performing between 2-3 weeks every month.

Over the years, “Flex 80’s” has evolved to become more than just an 80’s band, performing disco hits from the 70’s, and great hits from the 90’s all the way up to current hits of today.  The show is highly adaptable and each show can be built specifically for each venue.  Also available are the various visual options for the show, such as go-go dancers and ‘the wheel’.