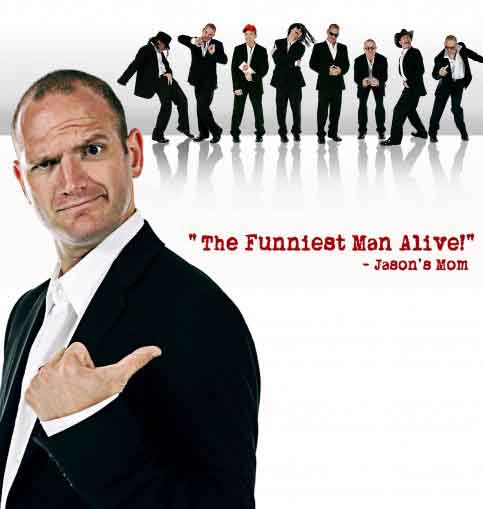 Star of the Las Vegas Strip, Jason N has headlined and appeared at every major resort and casino in Las Vegas! He has been the host of “V The Ultimate Variety Show” at the Planet Hollywood Casino, Star of Nathan Burton Comedy Magic” and X-Burlesque at the Flamingo Hilton, Showgirls of Magic, Buckwild at the Sahara Hotel and dozens of other hit shows up and down the Strip! Right now, Jason’s lust for life has taken him traveling and exploring the world as the star of his own one man show. When Jason is home in Las Vegas nearly every other week, you may be lucky enough to see him starring in or hosting “V The Ultimate Variety Show” at the Planet Hollywood Hotel and Casino.

With a repertoire of over 300 celebrity, political and cartoon voices, you may see Dean Martin, Dr. Evil, Forrest Gump, Kermit the Frog, John Mayer or George Burns… You never know! George Bush, Bill Clinton, Jack Nicholson, or even Elvis may show up during Jason’s show.

Watching Jason’s 90 minute live show is like watching a concert of hundreds of your favorite stars!

Jason’s high-energy live show is a hit with nearly every age demographic and audiences from around the world!

Jason’s unique talents are in high demand at Casino Showrooms and corporate markets all over the world.

Jason was a finalist on the hit television series “America’s Funniest People” and has co-produced and starred in television specials for NBC, Bravo, Sci-Fi Network and MTV.